BY all accounts the last 12 months has been relatively buoyant for the Australasian travel and tourism sector — and that’s certainly been reflected in some of the pay packets received by those at the top of the tree. But it’s also a matter of swings and roundabouts, with some former high earners taking quite a bit of a haircut in 2018/19 compared to previous years. However this year the 15 top earners in travel and aviation all made more than $2.5 million, meaning perhaps we need to shift the goal posts for this annual feature. Bruce Piper investigates the 2019 Million Dollar (or should it be the $2.5 Million Dollar) Club.

Flight Centre CEO Graham Turner must be thanking his lucky stars for Bill Shorten. I’m not certain of Skroo’s politics, but I wouldn’t imagine that he would normally be positively disposed to someone whose career has focused on unionism and elections. However the proposed policies of the former Labor leader, who took his party to a spectacular defeat at the May 2019 election, played a key role in Turner almost doubling his income over the last 12 months to an eye-watering $47 million.

Despite the final election outcome which saw Scott Morrison sweep to victory, the lead-up to the poll saw the ALP widely expected to win — and the Flight Centre board was so concerned about the Labor Party’s policy in relation to dividends that they decided to act. Sitting on a mountain of cash, the company’s directors decided to hand some of it back to shareholders in the form of a one-off special dividend worth $1.49 per share — equating to a total of $211 million. As one of the company’s biggest investors, Skroo’s proportion of this was a handsome $22.7 million — in addition to normal dividends worth another $1.58 per share declared during the year.

The special dividend was fully franked, meaning the company had already paid tax on it. Under ALP policy there was a possibility that the future tax treatment would change. “We’re generally quite conservative on our capital management, but this is just a fact so that people can get the advantage of franking credits that might not be there next year,” Turner said. The windfall saw his income skyrocket 90% compared to last year, and also benefited other top Flight Centre executives — but not as much as you’d expect.

Over at Helloworld Travel a strong year saw incomes maintained by CEO Andrew Burnes and his wife, Executive Director Cinzia Burnes, despite their September 2018 sale of about five million shares to domestic and international institutional investors — or about 11% of their total shareholding. The travel power couple took home base salaries of $570,000 each, with Helloworld’s 20.5c per share dividend on their remaining roughly 39 million shares boosting their total take to about $9.1 million combined, up 3% compared to 2017/18. The Helloworld figures were also notable for revealing the $1.2 million salary package of Group GM Retail and Commercial, John Constable. His base pay of $570,000 was on par with the Burnes’ but he also received a $171,000 bonus along with almost $340,000 in housing, motor vehicle and travel allowances. Constable’s Helloworld stake of 500,000 shares added a handy $102,500 to the total, meaning his overall income was just over $1.36 million for the year.

It’s been a tough 12 months for Corporate Travel Management CEO Jamie Pherous, whose well-publicised battles with hedge fund raiders have significantly slowed the company’s share price growth. However he’ll be able to take solace in the CTM 40c per share dividend, which when paid on his 21 million shares, lifted his $643,000 base salary package to take his overall income to just over $9.1 million for the year, up around 13%. CTM Chief Operating Officer, Laura Ruffles, also did well, with her $700,000 base salary eclipsed by a $1.1 million bonus, which helped lift her income to about $2 million in total. The company’s other top earners included the heads of its operations in North America, Chris Thelen, and Larry Lo, CEO of the Hong Kong-based Asia business which is likely to be doing it tough amid the huge downturn due to the unrest in recent months. Thelen and Lo took home about $1 million each, while the company’s recently appointed CEO Australia/New Zealand, Greg McCarthy entered the Corporate Travel Management remuneration report for the first time with an overall income of just under $650,000.

Webjet’s stellar share price performance made a big difference for CEO John Guscic, who has been amassing a seven million share stake in the business through a company-funded loan scheme. Guscic’s $850,000 base salary was boosted by a $535,000 bonus, but the real money came from dividends which lifted his total income to more than $3.6 million. That put him into the stratosphere compared to offsiders Shelley Beasley, Graham Anderson and Tony Ristevski, all of whom earned less than $1 million each.

Pay packets up in the air…

The huge salaries paid in Australia’s aviation sector are also a constant source of fascination, both within the industry and among the wider public. Despite the overall package earned by Qantas CEO Alan Joyce actually more than halving in the last 12 months, recently a number of media outlets have once again highlighted his stunning $23 million-plus take-home in 2018 which was based on the airline’s surging share price — arguably seeing him simply reap the rewards for achieving the most important KPI of all as far as the shareholders are concerned. In the most recent financial year Joyce earnt just under $10 million, with a $2.15 million base salary bolstered by a $1.76 million bonus. The balance was made up once again of share price appreciation as well as a 25c per share dividend on his 3.2 million shares.

And as in previous years, Joyce wasn’t the only top Qantas executive to be part of the Million Dollar Club. His key direct reports, including newly appointed CEO of Qantas International, Tino La Spina, along with Jetstar Group Chief Gareth Evans and Qantas Domestic CEO Andrew David, all earnt more than $3 million, with Evans topping the table with a $3.74 million package. Qantas Loyalty CEO Olivia Wirth had a smaller base salary of $846,000, but received a $560,000 bonus and other items taking her total income to about $2.25 million. 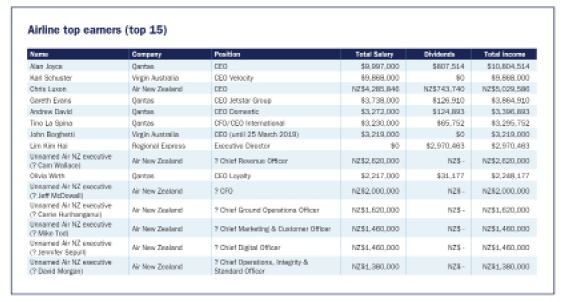 At Virgin Australia a surprise big earner was Karl Schuster, CEO of the airline’s Velocity loyalty program. Although he had a relatively small base salary of $551,000, the statutory measure of his full package included a hefty $8.8 million in share-based payments, based in the change in the estimated value of the amount he may earn “should a qualifying exit event occur”. The airline’s former CEO, John Borghetti, who stepped down on 25 March 2019, took home $3.2 million including a $2.5 million termination benefit. He also retains lifetime membership of the ailrine’s lounge facilities. His replacement, Paul Scurrah, earnt $432,000 during his first three months leading the airline.

Regional Express, Australia’s other key listed passenger carrier, isn’t quite in the same league, with not a single one of its senior executives taking home a package worth more than $310,000. In fact the airline’s Executive Chairman, Lim Kim Hai, does not even draw a salary from Regional Express — but was remunerated to the tune of almost $3 million in dividends on his 24.7 million shares in the carrier.

Closer down to earth…

Because some of the other listed companies in the travel and tourism sector operate in multiple areas such as cinemas, movie-making, theme parks, hotels, ski resorts and more, it’s difficult to provide an accurate comparison of executive remuneration for businesses like Village Roadshow, SeaLink, Serko, Jayride, Crown Resorts and Apollo Tourism. At SeaLink, which operates travel and tourism businesses alongside a comprehensive portfolio of maritime services, the company’s soon to retire Managing Director, Jeffrey Ellison, was far and away the biggest earner courtesy of his 5.5 million share stake, which boosted his $526,000 base salary to a very respectable $1.44 million overall income.

But the biggest amounts earned among these companies went to Village Roadshow CEO Graham Burke, who took home more than $3.8 million in dividends to boost his total package to $5.1 million. That was fractionally above his colleague Robert Kirby, Village Roadshow Executive Chairman. Crown Resorts, which has also endured a horror year due to questions both within China and locally about its involvement in the “high roller” gambling market, saw its executives certainly earn their pay, with Executive Chairman John Alexander receiving a salary package of $4.4 million, boosted by dividends to $4.7 million for the year. Other Crown top earners included Executive Vice President Strategy, Tod Nisbet on just under $3.7 million; Australian Resorts CEO Barry Felstead at around $3 million and CFO Ken Barton with a $2.98 million package. Unfortunately rival casino operator Star Entertainment Group hadn’t released its annual report with salary details prior to travelBulletin‘s deadline for this issue.

Event Hospitality CEO Jane Hastings earned just under $3 million, with the company noting she was being rewarded for “full achievement” of short term targets including commercially sensitive business transformation initiatives, management of property developments and other business growth targets. Motorhome operator Apollo Tourism and Leisure also rewarded its co-founders, Luke and Karl Trouchet, whose significant stakes in the business saw dividends boost their incomes to $1.55 million and $1.38 million respectively.

While it’s fun to take a peek into the astronomical salaries earned by the senior executives at our listed travel and tourism companies, it’s also worth sparing a thought about what’s happening in the wider, non publicly-listed parts of the industry. Nobody is likely to shed a tear for these big earners, but having this information generally available through the release of each company’s annual report on the Australian Stock Exchange is likely to be a particularly uncomfortable sensation.

We all love to pull down a tall poppy, and the ASX disclosure rules make these people an easy target. And of course there are many, many highly successful Australian businesses where I suspect the top earners could even make significantly more than many of these highly scrutinised industry chiefs — just look at the plethora of highly successful locally-owned operations like Intrepid Group, Scenic, APT Travel Group, Phil Hoffmann Travel, Bunnik Tours, Consolidated Travel and more. In the end for business owners it’s a mixture of risk and reward — and putting your livelihood and your family on the line sometimes does result in a generous, well-deserved payback.

Indeed, the fact that some of Australia’s highest earning executives are in the travel and tourism sector is an indication of the prosperity that this fabulous industry brings to the economy.

And when it all comes down to it, as they say “money can’t buy you happiness”. But others have noted that if you think that, you’re just not spending it right.