CELEBRITY Cruises has taken the wraps off its newest addition to its fleet, Celebrity Beyond, and it will bring with it a host of new features, writes Sarah Beyer.

Celebrity Cruises has a pipeline of new ships coming into service in the next few years and Celebrity Beyond is the latest in its revolutionary Edge ships, joining Celebrity Edge and Celebrity Apex. Beyond will debut in April next year with a maiden voyage from Southampton, England, and is aptly named, with Celebrity Cruises taking its innovative outward-facing design even further, aiming to create a closer connection between guests, the sea and what is on the horizon. 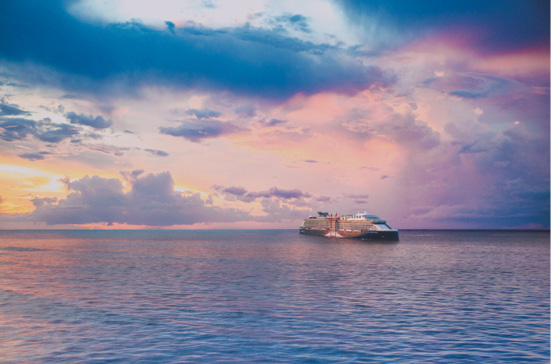 The designers and architects who worked on the two first Edge series ships were brought back for Beyond, but their roles were expanded, and the ship was designed entirely in 3D. Not only were their roles enlarged, but the ship itself has been as well, with Beyond one deck taller and 20m wider than its Edge series sisters, and showing off a sleeker profile.

A breath of fresh air

The outdoors has always been a place where you can be restored and Celebrity has sought to bring its guests even closer with the salty sea air and endless blue ocean.

Compared to Beyond‘s sister ships in the Edge Series, the Sunset Bar onboard is 180% larger. Laid out across two storeys, its location at the aft of the ship offers incredible views of the surrounding ocean or shoreside when in port. The bar has a Moroccan-inspired feel thanks to Nate Berkus and Tom Wright from WKK, and features terraces and plush daybed niches while also connecting easily to the alfresco dining area of Oceanview Cafe.

Another area of the ship where guests are invited to connect with the outdoors is the Rooftop Garden. Travellers can unwind in the float pools that are cantilevered to extend 2m over the water, thanks to Kelly Hoppen and Tom Wright’s design, or else recline in the loungers and day beds that surround them. The Rooftop Garden also offers plenty of spots to relax with a book in shaded seating areas, or challenge a friend to a game of giant chess.

When you’re surrounded by the ocean, its not hard to want to take a swim, and the Main Pool on Celebrity Beyond gives guests a range of options. Swim a few lengths in the 25-yard lap pool, hide away for some privacy in one of the eight cabanas which are elevated slightly above the pool deck and repositioned for a better view of the pool and ocean, compared to on other Edge series ships, or enjoy a soak in one of the two storey martini-shaped hot tubs.

Finally, when it comes to the outdoors, nothing can compete with the views offered on the cantilevered Magic Carpet where you can drink, dine or just relax.

Celebrity Beyond features 179 more suites and staterooms than its Edge series sisters, including double the number of Infinite Verandas which are designed for solo travellers. The cruise line’s ship within a ship concept, The Retreat, has also been expanded and redesigned. In The Retreat, travellers enjoy suite accommodation, as well as private dining, exclusive spaces and a range of services and amenities. The Retreat Sundeck now stretches across two levels outdoors, and a second hot tub has been added.

The private restaurant, Luminae at The Retreat, has a new design and has been repositioned to the front of the ship so diners can enjoy panoramic views through the floor-to-ceiling windows, while they indulge in meals from the exclusive menu created by Michelin-starred chef Daniel Boulud. A 24-hour concierge gives The Retreat guests more time to enjoy Beyond, taking care of any arrangements on or off the ship. In terms of suite accommodations, highlights include the two-storey Edge Villas which have their own plunge pools, and the Iconic Suites which are the largest in the fleet. Guests staying in this part of the ship also receive premium drinks, streaming wi-fi, service charges, a shore excursion credit, and an onboard credit to use however they choose.

Beyond also introduces a new type of suite to the Celebrity fleet, the AquaClass Sky Suites. The rooms combine the best of the AquaClass stateroom experiences, with access to the luxurious spaces, services and amenities of The Retreat. These rooms are perfect for those who want to nourish their mind, body and spirit on holidays, located just steps from the lift to the Spa, private verandas, eco-friendly bath products and yoga mats provided.

Travellers not staying in The Retreat or AquaClass Sky Suites are still spoilt for choice, with favourite accommodations returning such as AquaClass, Concierge Class, Infinite Veranda and Singles.

Celebrity has sought to bring a new level of luxury to Celebrity Beyond, and that hasn’t stopped with the amenities and spaces on board the ship, but extends to the way the cruise line has elevated wellness on board, with a new partnership with actress and entrepreneur Gwyneth Paltrow.

The new AquaClass Sky Suites are one aspect of this partnership, but Gwyneth Paltrow’s role as Well-being Advisor will also see AquaClass guests across the entire fleet treated to new onboard wellness offerings including fitness kits from Paltrow’s goop brand, while all travellers can experience curated wellness programming from the team at goop.

A-list talent has also been added to the culinary team, with Celebrity’s Global Culinary Ambassador chef Daniel Boulud bringing his first signature restaurant at sea to Beyond, called Le Voyage by Daniel Boulud. The venue offers a menu inspired by flavours around the world, paired with the most awarded wine collection at sea, with recommendations by expert sommeliers and a farewell treat to top off your dining experience.

Boulud has also exerted his influence on the other restaurants onboard, with the main restaurant providing four complimentary dining options — Normandie, Tuscan, Cosmopolitan and Cyprus. Each restaurant’s menu changes nightly, inspired by the regions they represent, and offers its own ambience.

Celebrity Beyond will cruise the Mediterranean and Caribbean in 2022. To learn more or book your client’s luxury holiday, CLICK HERE.